Khakee The Bihar Chapter and the conundrums of Indian society

Khakee: The Bihar Chapter, which is streaming on Netflix, is a show that discusses how no crime can be justice. The series also reflects on the conundrums Indian society is facing. 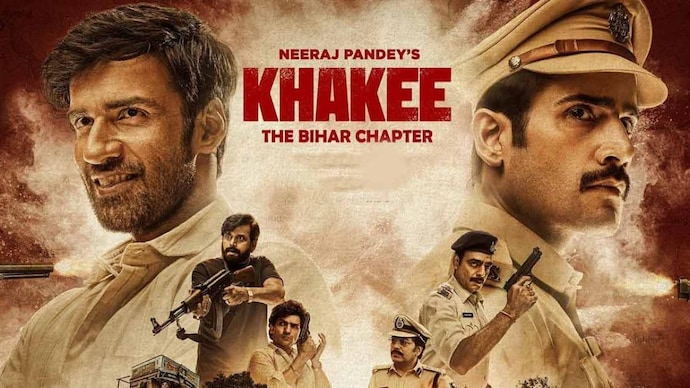 Khakee: The Bihar Chapter is streaming on Netflix.

By Sharmi Adhikary: In a blink-and-miss scene in Neeraj Pandey’s espionage thriller series, Special Ops, Abbas Sheikh (played by Vinay Pathak), slaps the usherer of a Delhi discotheque, seeing how the authorities are flouting the rule pertaining to the minimum drinking age, but doesn’t exactly punish the property owners. The sequence, while making the audience chuckle (largely because of the effortlessness Pathak puts into the randomness of it), is also a tongue-in-cheek commentary on how there are many matters where the police let things be. Is this Pandey complaining about the niggling faults in the system? Or is it his balancing act to depict how law-keepers deal with several anomalies in our country on a daily basis? Clearly, this hot-and-cold treatment is a part and parcel of the trade. Rather, it is an overarching truth in this democracy that needs to run like a well-oiled machinery. And these nuggets of reality form the crux of operations here.

Such truth bites pepper Khakee: The Bihar Chapter as well, considering it comes from Pandey’s stable, a filmmaker from whose studio the audience enjoys some of the most riveting crime dramas depicting our Indian men in uniform. For instance, Mukteshwar Chaubey (Ashutosh Rana is a delight to watch) is more excited about big TV channels rushing in for his byte when an Express train is stopped by village protestors rather than being worried about his officer being held back by them! A junior official introduces Amit Lodha (played by Karan Tacker) into the Bihar way of life, suggesting he uses ‘Hum’ instead of ‘Main’ as if that trick would iron out problems. In the lightheartedness of things, these inclusions make Bhav Dhulia’s work (produced by Pandey) real and relatable. For, the balance in the vision through which the work is rendered is remarkable. There is no shying away from the anomalies in the system, the corruption, personality flaws, political machinations, the lies, deceit and sycophancy, the caste disparities, the impediments to deliverance of justice, the constitutional loopholes, the stricture in protocols and yet, there is this earnestness to be sympathetic towards all perspectives. Without which, this adaptation of Bihar Diaries (written by the IPS officer and top cop Amit Lodha) wouldn’t have been half as engaging.

While the series chronicles how Lodha, helmed by a rather talented, dedicated and brave team, nabs the merciless criminal Chandan Mahto (the original name of the crook is changed) after months of backbreaking investigation, follow up and several glitches in the way, the script also subtly underlines the toxic casteism prevalent in Bihar which gets misused for settling political scores. This inter-caste strife and rivalry (mainly between the Bhumihars and Kurmis) have wreaked havoc on the state’s social fabric. Ambitious netas have played to the gallery at some point, misusing these rivalries, too. The sensitive law and order situation had a cascading negative impact on Bihar’s social and economic development, which was spurned due to the chain of revenge killings (among the Bhumihars and Kurmis over 200 innocent lives were lost) which took innumerable innocent lives. Unfortunately, political leadership at the highest level of state policy did not show vision and magnanimity to deal with the issue with wisdom and selflessness. Okay, let’s not beat around the bush. Corruption of some police officers who sucked up to malevolent politicians for their selfish gains ensured caste supremacy was perpetuated in many rungs. A crime drama based in Bihar must delve into all this with an impartial eye. Khakee does that and hence becomes gripping. It speaks of situations that have political, social and economic ramifications.

As citizens of this democracy, it is imperative we witness work that honestly and objectively showcases how politics shapes up a society that has been through a lot historically. Every criminal has a backstory, but Dhulia’s direction explains with impeccable balance how no crime can be justified. Perhaps that is why Chawanprash (Mahto’s right-hand man, played by Jatin Sarna) harbours a desire to make his son an English-speaking professional despite himself being a hardened criminal. Because crooks recognise the stigma of being social pariahs, they follow the stigmatised path. The narrative holds a mirror to the flawed judiciary and its regulations apart from the corruption seeping into the system that often jeopardises the integrity and success of operations. It’s also interesting how both parties follow protocol of actions and ensure they are not flouted. If one side breaches rules, the other automatically extracts a chance to hit back! This makes the conflict worth keeping a tab on.

In the wake of Bollywood employing erroneous sketches to depict India’s police force, here is an earnest effort to show their trials and tribulations. Cutting the jingoism aside, one has to understand the constitutional limitations they have to tackle in just about any operation (the Simbas and Singhams have it too easy even as the camera is busy sexualising their abs and biceps. Also, leaving aside romance, top cops chasing gang lords barely get a breather with their families). This is where the series tightens it out with taut detailing. Pandey’s pen salutes brave men, at least the ones who are honest and diligent, who are serious about change. They brandish kicks and punches too, but intelligence, planning and precision are their main weapons.

The urban viewer is stimulated to reflect on the conundrums the Indian society is facing, thanks to the nuanced writing here. Even though the villain has a human side, his heinous actions are not justified ever. The fiefdom of corrupt ministers thrives with the help of spineless law officers. But Pandey is never on an overdrive to prove that everyone is a bad apple. If that was the case, we would not have been denizens of such a thriving democracy!

Other View: Stewart Rhodes, the Oath Keepers and other Jan. 6 plotters must pay the price for their crimes – Post Bulletin