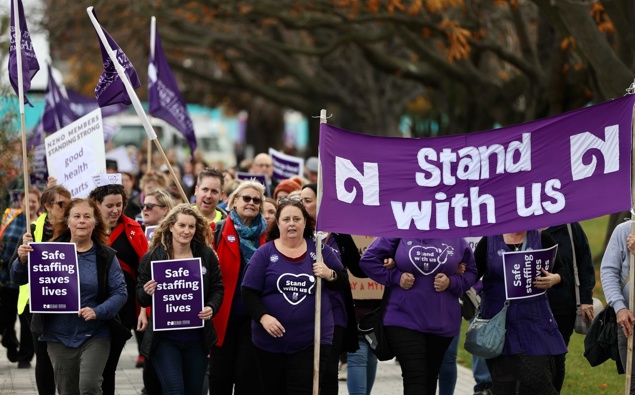 A funding announcement on pay parity for nurses is imminent as the Herald can reveal Cabinet was expected to consider a proposal that will go toward establishing pay parity between hospital nurses and those who work in the community.

Health Minister Andrew Little told the Herald funding to institute parity between the two workforces would come in two stages and that the first tranche had been secured, subject to Cabinet ministers signing it off.

It was understood the total amount necessary to achieve pay parity could cost $450 million but that figure could rise depending on the outcome of other pay settlements.

A public announcement was expected imminently, the Herald understood.

The news has been cautiously welcomed by nurses union, the New Zealand Nurses Organisation (NZNO), but its chief executive wants to see a “substantive” amount promised to nurses along with assurances employers would not intercept the money.

It comes amid a long-fought battle between two unions and Health New Zealand over the related issue of pay equity that was heading to the Employment Court, while the health sector struggles with a crippling nurse shortage that amounts to roughly 5000 vacancies.

Pay parity had been a historic issue in the health sector with nurses who worked for then-district health boards earning more than counterparts in general practice, aged residential care and other community providers, despite performing the same role.

In an interview with the Herald, Little indicated he was pleased to bring a proposal for the first tranche of the pay parity payment to Cabinet.

NZNO chief executive Paul Goulter explained it was necessary to split the payments into two stages as the total figure was dependent on pay equity rates that were currently being debated by the Employment Relations Authority.

Goulter acknowledged that while nurses might feel cynical about how long the process had taken, he said the proposal heading to Cabinet was a “positive move”.

However, he hoped what would follow was a sizeable contribution, paired with assurances for the future.

“There needs to be a certainty that the second payment will be made and something that ensures that that money actually ends up with the nurses and isn’t intercepted on the way through,” he said.

As noted by Goutler, advancements on pay parity were unlikely to thaw the frosty relationship union members had with the Government, thanks to the ongoing court battle over pay equity backpay.

The unions were engaged in a battle over backpay they felt was promised to their members during a landmark agreement between unions and district health boards (now replaced by Health New Zealand) to establish pay equity.

In May, the NZNO confirmed its members had voted to refer the DHB Nursing Pay Equity settlement – worth about $520 million per annum to the health payroll – to the Employment Relations Authority (ERA).

“This follows widespread concern from members and other affected DHB employees that the DHB employers were not honouring an agreement in the 2020 DHB/NZNO MECA (signed last year) that each employee would receive back pay on the basis of the new rates to 31 December 2019,” an NZNO statement from May said.

“Instead, a series of lump sum payments in recognition of past work has been proposed, amounting to much lower remuneration for many nurses than they would have received had they been back-paid as originally agreed.” The matter had since been transferred from the ERA to the Employment Court.

Goulter told the Herald last week it was important to resolve the matter quickly.

“Our claim is based on a strong belief that the Crown did enter into an obligation to pay full backpay. The Crown’s position is they didn’t,” he said.

“We believe it’s in everyone’s interest to have this matter adjudicated on by the court as soon as possible to resolve it and move on.”

Little repeated his long-standing position that DHBs had not agreed to paying the backpay, and Health New Zealand would fight the claim in court.

“From the Government’s point of view, given the advice we’ve had that there is no contractual entitlement [to the backpay], obviously we have to defend it.

“If we don’t, then the cost of the two years backpay would be between $650 million and $1 billion, I don’t have that money to put into it.”

Should Health New Zealand lose, the potentially $1b bill would add to the $520m annually for pay equity (likely to increase when the ERA decided on new equity rates), at least $450m for pay parity (also likely to increase), and $2b in backpay for payroll breaches of the complicated Holidays Act.

Despite the enormous sums, Little said money had been set aside to honour those commitments, except for the pay equity backpay which was set to be litigated.

Speaking at the NZNO conference in September, Little said decisions from the Employment Court and the ERA were likely to be “more than a year away”, which meant the issues could still be unresolved come next year’s general election. Little last week said the drawn-out process would not encourage more people to join the profession as was dearly needed to relieve pressure on the sector, particularly in emergency departments where excessive wait times partly caused by staff shortages had been linked to the deaths of Kiwis.

“This dragging out in this sort of way, I think if they were anything like me, people would find it incredibly frustrating.”

The commitments could also be in jeopardy should a National coalition make it into Government.

Goulter’s expectation was that any incoming Government would honour those commitments for the sake of the sector and the workforce.

“The bottom line is we simply cannot attract and retain enough nurses in this country and why on earth a Government of either hue, old or new, would want to disrupt a process that we’ve set up to remedy that issue, I have no idea,” he said.

National health spokesman Dr Shane Reti said he had not been involved in negotiations between unions and the current Government and as such, could give no assurances.

“We have a track record with pay equity but we’ve not been privy to these negotiations and what commitments and promises were made by the Government.”

On the prospect of paying an as yet unsecured $1b for pay equity backpay, Reti felt Little’s only options were to substantially cut from “business as usual” processes or reprioritise poorly performing services.

“You’d have to do so much, you almost couldn’t find that in the best of cost savings, I would have thought.”

‘I will not step on that landmine’: Netanyahu dodges open support for...

Blinken vows US support for Israel despite unease over gov’t