Victims and witnesses have described the terrifying moment they were caught up in the twin bomb attacks at Jerusalem bus stops on Wednesday morning.

Aryeh Schupak, 16, was killed, and at least 20 injured in the two blasts at entrances to the city.

Many of those caught up in the terror were children and teens on their way to school.

The first explosion hit a bus stop at the entrance to the city at around 7:05 a.m., and barely half an hour later another bomb went off at another stop near the Ramot neighborhood in the northwest of the capital.

Shahar Sorkis and Neta Varshavski, both 14-year-olds who attend a school in Ramot, saw the second explosion as they traveled with other schoolkids on a nearby bus.

“We saw loads of shrapnel flying off the bus… it was a mess,” Varshavski told the Ynet news site. “We heard a noise and then we saw a lot of people running, a lot of children crying.”

“When we saw the explosion a lot of the girls began to cry. There was a lot of stress,” Sorkis added.

Police and security personnel at the scene of a terror attack in Jerusalem, on November 23, 2022. (Olivier Fitoussil/Flash90)

The explosion damaged a No. 67 bus that was passing at the time. The driver, Motti Gabay, told Ynet that he quickly realized it was a terror attack.

“There was panic,” he said.

Gabay, who has been a bus driver for 23 years, including the period of the Second Intifada in the early 2000s when Palestinian terrorists frequently targeted buses with bombs, said he had expected that such attacks would one day return.

“First of all, I opened the doors and people got off,” he said, noting that Israelis “are used to this already.”

Yael, 17, was walking toward another stop in the area to catch a bus “when I heard a tremendous bang behind me, a lot of smoke, a shockwave.”

“We ran and feared it was a terrorist with a gun, ” she said.

The teen was taken to the hospital suffering from anxiety and told Ynet, “It is still scary, I am trying to calm down, I still haven’t absorbed what happened.” 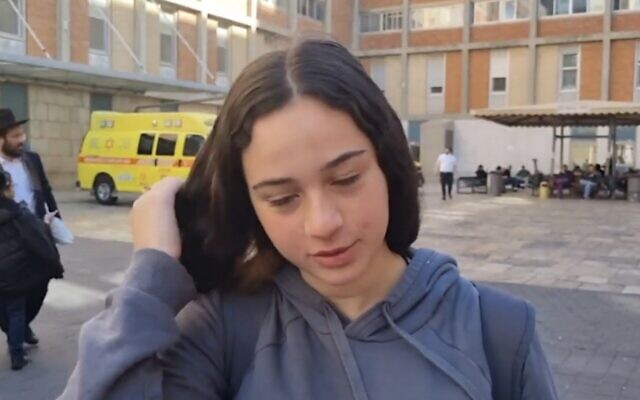 Screen capture from video of Yael, 17, who was caught in a bomb attack in Jerusalem, November 23, 2022. (Ynet. Used in accordance with Clause 27a of the Copyright Law)

The earlier deadly bomb, at another entrance to the city, caught people as they waited for transportation at a busy stop.

Avi, a resident of the Givat Shaul neighborhood opposite the bus stop, told the Walla news site that he was about to leave home when “suddenly we heard an explosion, the whole neighborhood shook.”

At first, he and his wife believed there was a mundane reason for the noise but then soon “we heard the shouting and the panic from the entrance to the city and we understood that something had happened.”

United Hatzalah rescue service medic Yosef Gabay happened to be at a nearby crossing at the moment of the blast.

“I was standing at the traffic light and I heard the explosion at the bus stop,” he told Walla. “I arrived at the scene after a few seconds and came across a youth who was critically injured.”

“I began to give him first aid while asking the United Hatzalah headquarters to call all the emergency units to the scene.”

He said as he was treating the injured boy, “three more injured people came to me who were conscious, suffering from bruises and injuries.” 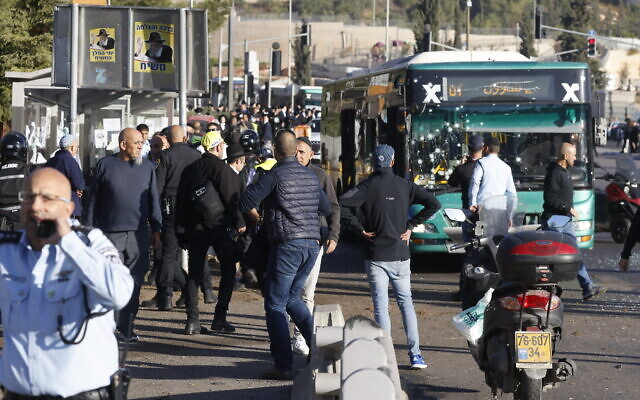 Police and security personnel at the scene of an explosion at the entrance to Jerusalem, November 23, 2022 (Olivier Fitoussil/Flash90)

The father of one of the victims wounded in the attack said his son saw a man take pictures of people waiting at the bus stop shortly before the explosion.

“My son saw that before the attack, someone with an Arab appearance came and took pictures of the station at the entrance to the city, and after a few minutes there was an explosion,” said Avi Biton.

“He took pictures of the people at the station and disappeared,” Biton added

Biton’s son was seriously wounded in the attack, according to hospital officials.

“My son was injured by a lot of shrapnel. He has one piece of shrapnel that is right in the skull, which cannot be removed, near a blood vessel. He has fractures in his vertebrae and pelvis, and bleeding in his stomach,” Biton said.

Uri Pilichowski told media he was at work when his daughter, Naomi, 18, sent a message to the family WhatsApp group saying she’d been injured in the attack as she headed to work as part of her civilian national service.

He said Naomi told him there was “a huge explosion and things flew up in the air.”

“‘It was very scary,’” he quoted her as telling him. 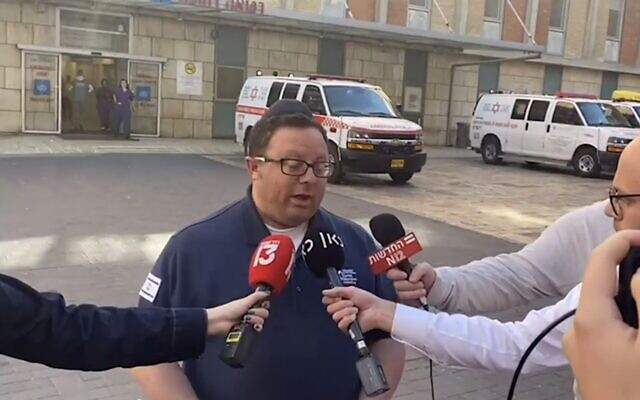 Screen capture from video of Uri Pilichowski, whose daughter was injured in a bomb attack in Jerusalem, November 23, 2022. (Ynet. Used in accordance with Clause 27a of the Copyright Law)

Naomi was lightly injured in her arm, he said, but “she is okay.” A friend who was with her at the time was unharmed.

The devices were packed with nails to maximize casualties, the Kan public broadcaster reported, a tactic often used by bombers during the Second Intifada.

I joined The Times of Israel after many years covering US and Israeli politics for Hebrew news outlets.

I believe responsible coverage of Israeli politicians means presenting a 360 degree view of their words and deeds – not only conveying what occurs, but also what that means in the broader context of Israeli society and the region.

That’s hard to do because you can rarely take politicians at face value – you must go the extra mile to present full context and try to overcome your own biases.

I’m proud of our work that tells the story of Israeli politics straight and comprehensively. I believe Israel is stronger and more democratic when professional journalists do that tough job well.

Your support for our work by joining The Times of Israel Community helps ensure we can continue to do so.

We’re really pleased that you’ve read X Times of Israel articles in the past month.

That’s why we started the Times of Israel ten years ago – to provide discerning readers like you with must-read coverage of Israel and the Jewish world.

So now we have a request. Unlike other news outlets, we haven’t put up a paywall. But as the journalism we do is costly, we invite readers for whom The Times of Israel has become important to help support our work by joining The Times of Israel Community.

For as little as $6 a month you can help support our quality journalism while enjoying The Times of Israel AD-FREE, as well as accessing exclusive content available only to Times of Israel Community members.

Thank you,
David Horovitz, Founding Editor of The Times of Israel

Accountability for War Crimes and Other Atrocities in Ukraine: Recent Reporting on Unjust Detentions and Disappearances in Kherson Oblast