NEW YORK — A pro-Palestinian activist on Tuesday pleaded guilty to federal hate crimes charges for a series of attacks on Jews in New York City in 2021 and 2022.

Saadah Masoud, 29, pleaded guilty to one count of participating in a conspiracy to commit hate crime acts. The charge carries a maximum sentence of five years in prison.

“Masoud deliberately targeted three victims because of their religion and nation of origin,” said US Attorney Damian Williams. “There is no place in this country for this offensive and hateful conduct.”

As part of his guilty plea, Masoud admitted to attacking three people due to their Jewish or Israeli identity. He will be sentenced in March.

Federal hate crime charges are relatively rare, and most suspected hate incidents in New York do not result in a conviction.

In May 2021, during mass protests in New York over Israel’s war with Gaza terrorists, Masoud assaulted a victim who was wearing a Star of David necklace in Manhattan, prosecutors said Tuesday while announcing the charges.

The following month in Brooklyn, he and a co-conspirator assaulted a victim wearing identifiably Jewish clothing outside the victim’s home.

And in April 2022, Masoud attacked a man, Matt Greenman, who had been wearing an Israeli flag on the sidelines of a pro-Palestinian protest in Midtown Manhattan. Greenman had gone as a counter-protester.

Matt Greenman after he was attacked by pro-Palestinian protesters on April 20, 2022. (Courtesy/Matt Greenman)

Masoud repeatedly punched the victim, who was holding crutches, and dragged him across the sidewalk, causing injuries including a concussion.

Greenman said Masoud followed him away from the gathering, before attacking him and saying, “This is what happens when you’re a terrorist.” Greenman is Jewish and previously lived in Israel.

Video filmed by the protesters showed Masoud following Greenman down a street and shouting at him, along with another protester, who called him “Jew” in Arabic and said he had a “dirty fucking flag.”

Investigators said that in security camera footage, they saw the assailant approach Greenman and throw him to the ground, also knocking down a nearby woman. Masoud then struck Greenman in the head and face for close to 20 seconds, dragging him face-first across the sidewalk and shoving away bystanders who tried to intervene, investigators said.

Masoud ripped away the man’s Israeli flag. The protesters’ video showed him returning to the front of the demonstration with the flag, where it was stomped on and set on fire. The footage appeared to show Masoud as a leader of the event.

Activists against antisemitism and bystanders pieced together who the attacker was shortly afterward, using witness testimony and online sleuthing, and sent Greenman the attacker’s name and photo, which he provided to police.

Masoud threatened the activists online in a series of messages, including, “I feel bad for you zionist people when judgment day comes and we slaughter all of them like sheep.”

The Times of Israel spoke with Masoud at the protest before the assault. Immediately after, a bystander who filmed the attack shared the footage and confirmed Masoud’s identity.

Masoud was arrested weeks later and charged with hate crimes in July. While investigating the assault against Greenman, investigators uncovered the two previous assaults.

Since his arrest, Masoud has been under house arrest and monitored with an ankle bracelet. Prosecutors indicated at an arraignment hearing last month that the investigation into the conspiracy charge is ongoing.

Greenman’s lawyer, Gerard Filitti, told The Times of Israel last month that the conspiracy charge was as serious as the attack charge. The conspiracy charge, meaning Masoud is suspected of collaborating with others to commit the crimes, was added last month. The charge relates to all three alleged attacks and could open the door to the prosecution of other individuals.

Filitti, a senior counsel with the nonprofit Jewish advocacy group the Lawfare Project, highlighted Masoud’s ties to anti-Israel groups including Within Our Lifetime (WOL), a pro-Palestinian organization that calls for Israel’s destruction in regular protests. The assault on Greenman occurred at a protest organized by the group. 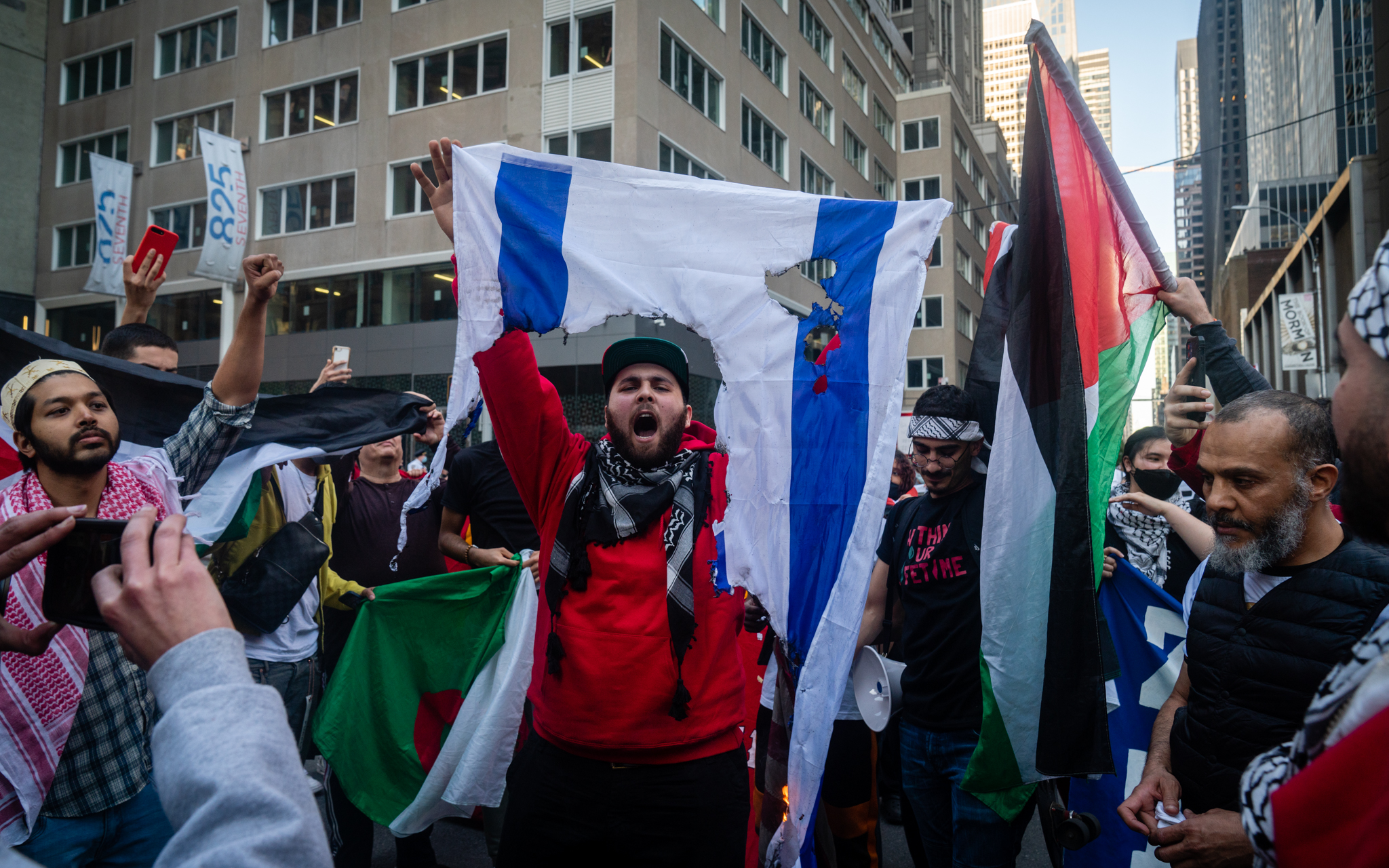 Jews are targeted in hate crimes in New York more than any other group.

“A lot of these attacks are not one-offs by crazy people on the streets, these are part of an orchestrated attempt to attack and silence Jews,” Fillitti said. “We know that Masoud has been connected to WOL Palestine and he’s been connected to other individuals, and especially considering that this attack happened at a protest that was being held by WOL Palestine, the conspiracy charge is very important.”

The April 20 protest began near the Israeli consulate in Manhattan. The organizers called for resistance “by any means necessary” ahead of the protest, which was also sponsored by the activist groups Samoudin and the Palestinian Youth Movement.

Around 100 demonstrators carried Palestinian flags and chanted, “Globalize the intifada,” “We don’t want no two states, we want all of it,” “Israel, go to hell,” and “From the river to the sea.” For Israelis, intifada — which literally means “uprising” in Arabic — conjures traumatic memories of a mass wave of terror attacks in the early 2000s. The period saw suicide bombings and other attacks in Israel that killed hundreds of civilians. 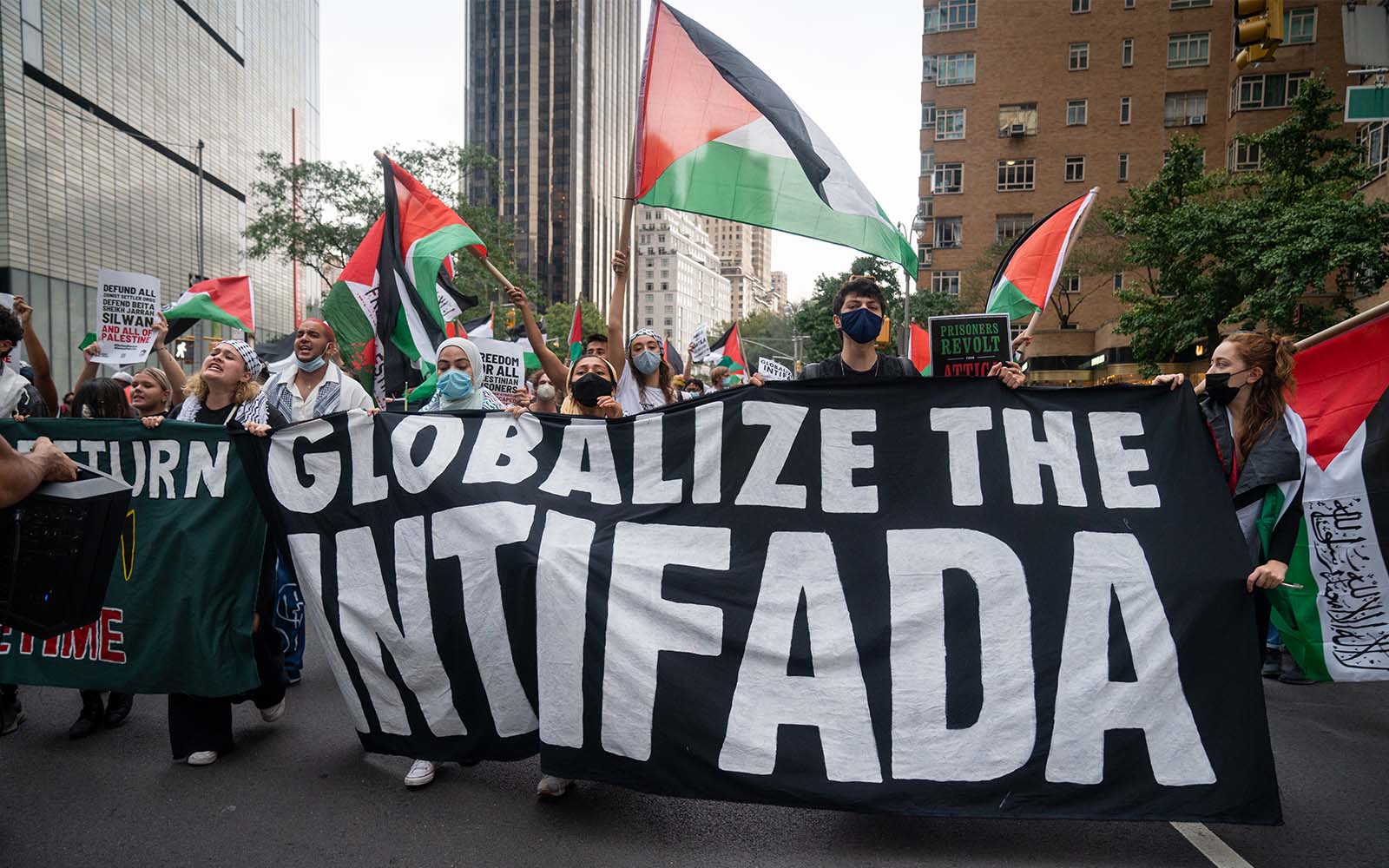 WOL regularly calls for an intifada and the destruction of Israel at rallies in New York, and has called for the targeting of Jewish organizations in the city, including by handing out maps of Jewish groups at a protest.

In May, Nerdeen Kiswani, one of the leaders of WOL, gave the commencement speech at CUNY Law’s graduation ceremony. The speech was largely directed against Israel and “Zionists.” Jewish advocates have said the CUNY system is a hotbed of antisemitism and accused the administration of turning a blind eye.

Video from the April 20 protest showed her at the front of the march with Masoud shortly after the attack while they were burning the Israeli flag.

She said before the attack that the Israeli flag was “responsible for the killing of countless Palestinians,” led chants of “Zionists you can’t hide” and called for Israel’s end “by any means necessary.” She said CUNY Law’s branch of Students for Justice in Palestine was in attendance.

The feds are taking up the case amid complaints from the Jewish community about the lack of penalties against anti-Jewish attackers, and criticism of cashless bail laws that often let assailants free shortly after their arrest. 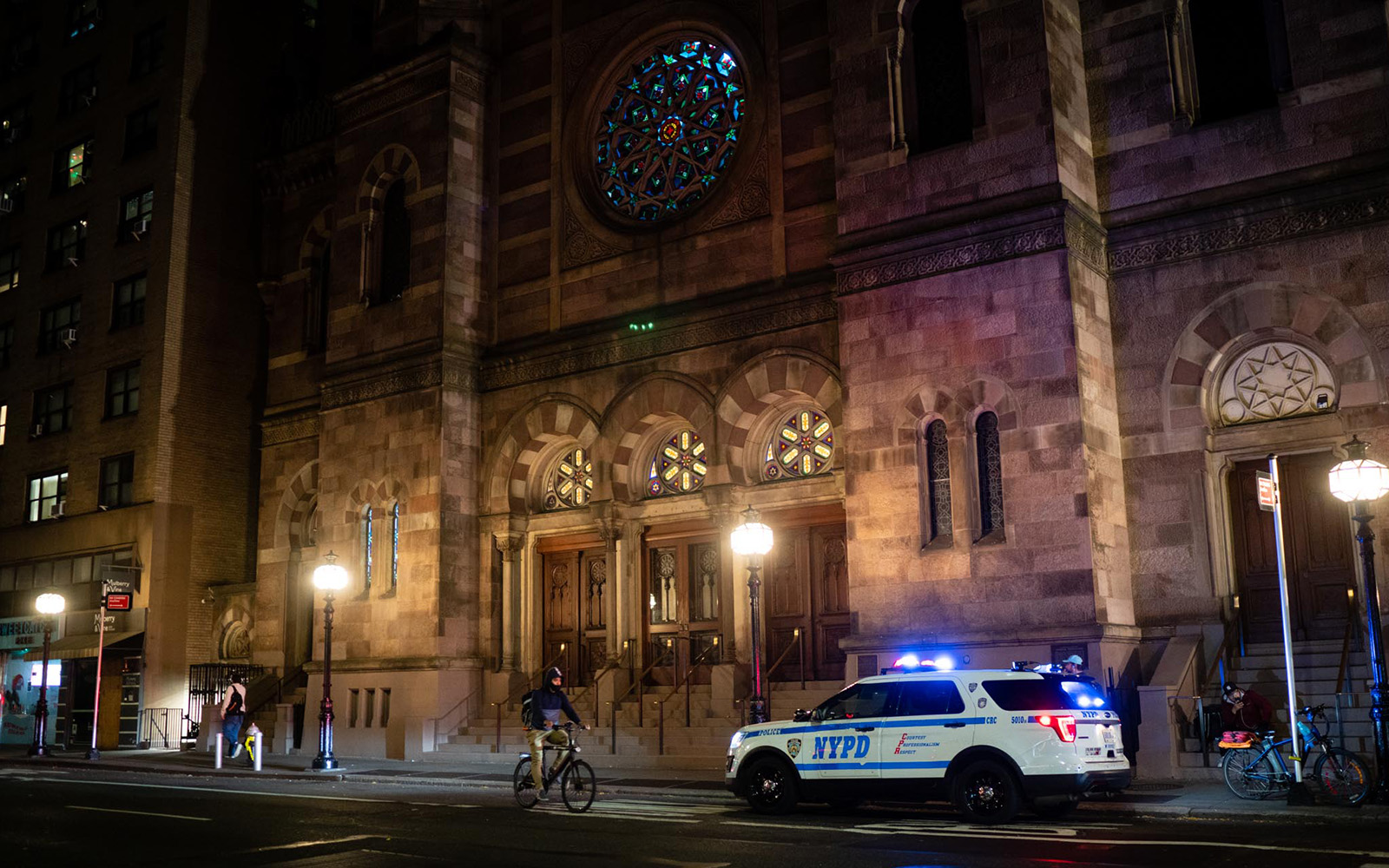 Police stationed outside a synagogue after threats to the Jewish community, in New York City, November 4, 2022. (Luke Tress/Times of Israel)

“It shows that the Justice Department is stepping up to the task of thoroughly investigating and prosecuting hate crimes in New York City where local prosecutors seemed to have dropped the ball, especially when it comes to hate crimes against Jews,” Filitti said.

A New Jersey man was charged with federal hate crimes for an antisemitic rampage that severely injured several Jews earlier this year.

Jews are targeted in hate crimes more than any group in New York City in both absolute and per capita terms, with reported attacks occurring on a near-daily basis, including 20 last month, according to the NYPD. The incidents range from assaults to verbal harassment, antisemitic graffiti and property damage.

On Saturday, police arrested two men and seized weapons and a Nazi armband over what police called a “threat to the Jewish community.” One of the suspects had threatened to “shoot up a synagogue.” Earlier this month in neighboring New Jersey all synagogues in the state were put on alert after a threat from an Islamic extremist.

Do golf carts need license plates in Florida? Here’s what to know.

Who Was Robert Abel, a Suspect in the Texas Killing Fields Murders?