The small Jewish community in Tehran on Thursday condemned the ongoing anti-regime protests in Iran, which broke out over the death of a young woman held for allegedly violating the Islamic Republic’s strict dress code.

In a letter, the Tehran Central Jewish Committee said it was standing by the Iranian regime amid a deadly crackdown on protesters.

“This is a condemnation of the recent unrest in the country that led to the death and injury of several people in our country, as well as many financial losses to the country,” the letter said.

“The community declares that it has always obeyed the position of the supreme leader,” it added.

Prominent figures in the Jewish community of Iran intermittently issue anti-Israel statements that match the regime’s agenda. Iran is openly sworn to Israel’s destruction and financially supports terrorist groups, like Hezbollah and Hamas, that are also committed to this aim.

Since the death of Mahsa Amini while in the custody of the morality police in Tehran in September, the protests have spread across the country. Authorities have responded with a crackdown that Oslo-based group Iran Human Rights says has left around 400 people dead, half a dozen sentenced to death, and more than 15,000 arrested.

“The community declares that the enemies of the system are creating insecurity by targeting the unity of the people. In recent days, unfortunate events and incidents have occurred in our beloved country, which has hurt the hearts of those loyal to Iran and the holy Islamic system,” the letter said.

Iranians protest the death of 22-year-old Mahsa Amini after she was detained by the morality police, in Tehran, October 27, 2022. (AP Photo/Middle East Images, File)

“The community asks all members of our dear country to avoid polarizing the country and to discuss things. We hope that in the near future we will see unity, peace, security, and happiness in our beloved country,” it added.

In September, during the first weeks of the protests, the committee issued a letter warning members to avoid synagogues during the violence.

The Jewish community in Iran has previously taken other precautionary measures to protect members, with the country’s chief rabbi saying last year that he condemned the US killing of top Iranian Gen. Qassem Soleimani in 2020 amid fears Jews could be physically attacked by some Muslim neighbors. 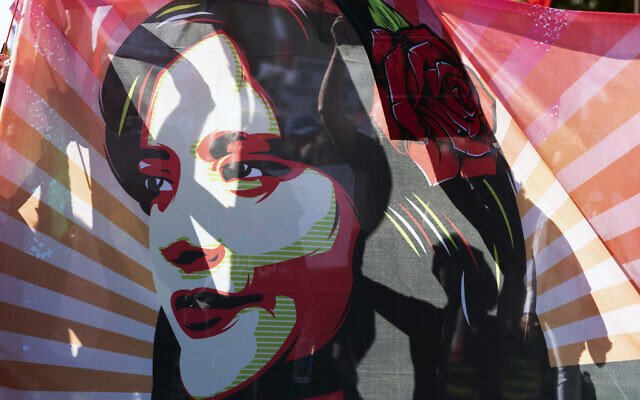 Demonstrators rally at the National Mall to protest against the Iranian regime, in Washington, October 22, 2022, following the death of Mahsa Amini in the custody of the Islamic republic’s notorious “morality police.” (AP Photo/Jose Luis Magana)

Amini, a 22-year-old of Kurdish origin, died on September 16, three days after her arrest in Tehran by the notorious morality police for allegedly breaching the Islamic dress code for women.

The rallies have been led by young women who burned their headscarves and confronted security forces in the biggest wave of unrest to rock Iran for years.

In October, the United States placed over a dozen Iranian officials on its sanctions blacklist for the crackdown on the protests.

Agencies contributed to this report.

I joined The Times of Israel after many years covering US and Israeli politics for Hebrew news outlets.

I believe responsible coverage of Israeli politicians means presenting a 360 degree view of their words and deeds – not only conveying what occurs, but also what that means in the broader context of Israeli society and the region.

That’s hard to do because you can rarely take politicians at face value – you must go the extra mile to present full context and try to overcome your own biases.

I’m proud of our work that tells the story of Israeli politics straight and comprehensively. I believe Israel is stronger and more democratic when professional journalists do that tough job well.

Your support for our work by joining The Times of Israel Community helps ensure we can continue to do so.

We’re really pleased that you’ve read X Times of Israel articles in the past month.

That’s why we started the Times of Israel ten years ago – to provide discerning readers like you with must-read coverage of Israel and the Jewish world.

So now we have a request. Unlike other news outlets, we haven’t put up a paywall. But as the journalism we do is costly, we invite readers for whom The Times of Israel has become important to help support our work by joining The Times of Israel Community.

For as little as $6 a month you can help support our quality journalism while enjoying The Times of Israel AD-FREE, as well as accessing exclusive content available only to Times of Israel Community members.

Thank you,
David Horovitz, Founding Editor of The Times of Israel

Values-driven community event hosted by city of Aspen this week